I was hired in October of 1994 to be the first, and at the time, only producer for the channel’s live domestic tournament coverage. I’ve written about it a bunch; in fact I wrote a whole darn book about my life in television and a lot of it was stories about my time at The Golf Channel. Go buy it and read it. You’ll like it.

People, so called experts, said a 24 hour, 7 day a week, 365 days a year, TV network devoted to golf would NEVER work. Never. Ever. My bosses at ESPN in October of 1994 said it too. Clearly they were wrong. There are a bunch of folks in Orlando, Florida celebrating today, and rightfully so, but by most accounts only FIVE of them have been employed by the all golf network since that amazing day in 1995. FIVE. I was there 18 of the 25 years, including day one of year one and spent the last couple days racking my brain trying to remember the names of the brave, talented, slightly to mostly crazy, wonderful, folks who were there with me. 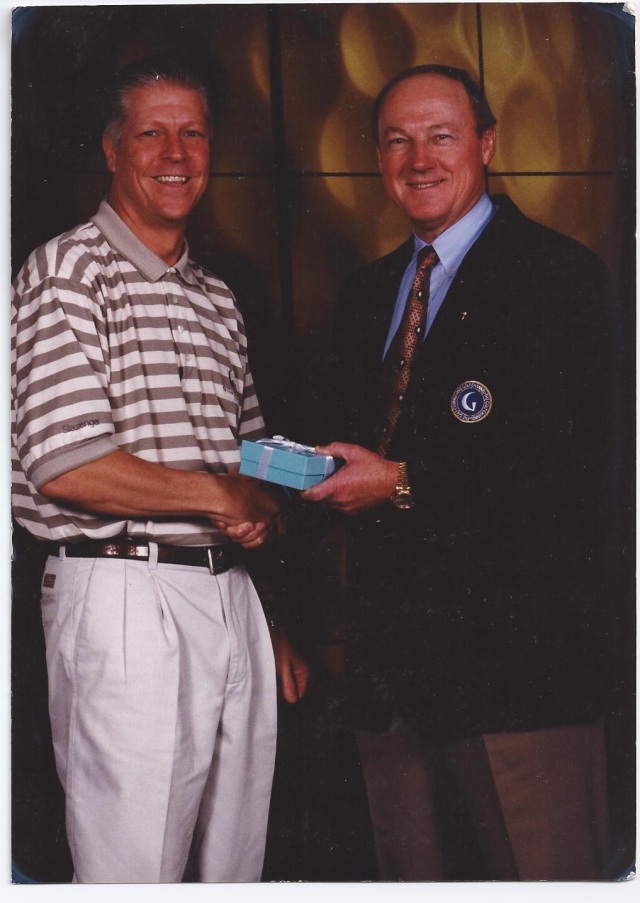 My list doesn’t include the freelance folks our live tournament team hired to put the PGA TOUR, The Nike TOUR and the LPGA on the air. Karel Schliksbier, Emmett Loughran, Chuck Whitfield, and Daisy Phipps hold a special place in my heart. So do Donna Caponi, Denny Schreiner, Jim Nelford, Gary Smith and Kay Cockerill.

The names of the full-timers come from a 64 year old’s memory. I know I forgot a bunch of folks and probably added one or two who weren’t actually there on 1/17/95 but the point is this… These are the people who deserve to be celebrated today. These are the people, in no particular order, who took a chance, believed in a dream, worked their tails off to make it a reality, and should sit back today – 25 years later- and smile.

I’m sorry to those who I forgot. It wasn’t intentional.

Congratulations Golf Channel on Twenty-five amazing years. Here’s to the next 25.

My name is Keith Hirshland and I am a four decades television veteran who has spent time both in front of and behind the camera. During nearly forty years in broadcasting my path has crossed in front of, behind and alongside some of the best in the business... And some of the worst. Many of those people I count as friends while others wouldn't make the effort to spit on me if I was on fire. This television life started early watching my Mom and Dad found, fund and run a local affiliate TV station in Reno, Nevada. As a teenager approaching adulthood I worked for them, first as an on-air sports reporter/anchor and later as a director and producer. Jobs in the industry took me across the country and then to many places around the world. Sports is my passion and putting it on TV has been my business. Production credits include auto racing, baseball, basketball, bowling, college football, field hockey, soccer, volleyball and water polo but the majority of my time "in the chair" since 1990 has been invested in the game of golf with both ESPN and The Golf. Channel ( I was one of the first forty people hired by TGC in 1994 ). I am a fan and I watch TV sports as a fan but I also have hundreds of thousands of hours watching from inside a production truck. I think that makes me qualified to comment, my hope is you agree. I have written four books, Cover Me Boys, I'm Going In (Tales of the Tube from a Broadcast Brat), a memoir that is a tribute to my parents, the hard working, creative people who started ESPN2 and The Golf Channel and a look back at my life in television. Cover Me Boys was awarded the “Memoir of the Year” in 2017 by Book Talk Radio Club. In February of 2019 it was released anew by Beacon Publishing Group. My second book is a novel, Big Flies, and is a mystery that tells the story of a father and a son with four of the world's most notorious unsolved robberies as a backdrop. Big Flies was named “Solo Medalist” in the True Crime category by New Apple Awards. My third book, another mystery titled The Flower Girl Murder, was published in 2018. Book number four might be the most fun I ever had on a writing project. Murphy Murphy and the Case of Serious Crisis is a mystery, a love story, and an homage to good grammar. It is both the Book Talk Radio Club BOOK OF THE YEAR for 202 and a TopShelf Awards first prize winner in the mystery category. All four are available at Amazon. Book five is in the capable hands of the good people at Beacon Publishing Group and should be available soon. I look forward to sharing new thoughts about golf, golf television, sports in general and the broadcast industry with you. The views expressed here are mine and mine alone. They are not connected to nor endorsed by any other person, association, company or organization.
View all posts by Keith Hirshland →
This entry was posted in Golf, golf on tv, sports and tagged Golf Channel. Bookmark the permalink.