My wife, Sarah, planned our vacation to Belize to include a final, full, day unencumbered by any plans. We woke up before the sun and because the lodgings at The Turtle Inn face east, including our own Starfish Cottage, we held hands in bed and watched it rise above the Caribbean Sea lighting up the Belizean sky in various hues of orange. Every day of the vacation started with, at the very least, a delicious cup of Guatemalan coffee and this one was no different. The four of us (Sarah, me, Bob and Susan Green) washed down a variety of morning delicacies with two French press pots of the rich, black, caffeine filled ambrosia and discussed what was in store for the day.

Sarah and Susan decided they’d spend the first part of the morning on paddle boards. I volunteered to play lifeguard (even though I would have had to corral and actual lifeguard if either actually needed help) while reading the next book on my list, Before the Fall a page turner written by Noah Hawley. Bob was going to read too but he decided to do that, on a lounge chair, in the comfort of the deck that surrounded our private pool. Time floated by on a soft, spring breeze and the early morning activities gave way to a mid morning walk along the beach and eventually lunch.

The food at The Turtle Inn, and Blancaneaux before that, was delicious but the salads, made with fresh, garden grown vegetables, were especially good. Leafy greens, cucumbers, tomatoes, carrots, mint, basil, and more, coming out of the ground not 25 yards from where we ate, were flavorful and filling. After lunch we headed back to the Starfish Cottage for a spirited game of bocce. Susan and Bob against Sarah and Keith, first team to 21 wins, best two out of three. The in-laws jumped out to a big lead but we battled back, first tying and then going ahead and on to win game one. game two was less competitive despite Bob and Susan trying to make a spirited comeback of their own. Sarah then decided we should “mix it up” so she partnered with her dad to take on Susan and me. This game to eleven. With the “pig” changing hands and finding hiding places in the sand, they piled up a few early points but then my mother in-law caught fire and brought us back to even at 10-10. Since you had to “win by two” I was imagining this game lasting for a while when Sarah nestled a ball up next to the “pig” and Bob expertly blocked our approach. I had one last chance to continue the game but failed miserably on my attempt and Sarah and Bob exchanged high fives (after setting their champagne glasses down, of course).

Post bocce seemed like the perfect time to get back on the resort provided bicycles and ride back into town to try the gelato which everyone said might be the best we’d ever have. I don’t have a lot of gelato experience but after enjoying a scoop of Stracciatella (vanilla with chocolate shards) combined with a scoop of cinnamon I couldn’t image gelato any where in the world tasting any better. Sarah and Bob both had Cappuccino  while Susan showed an amazing amount of control and abstained. Satisfied, we rode back to The Turtle Inn and took a dip in the Triangle Pool (filled with warm, salt water) then hung out some more before it was time for dinner.

The next day was departure day and we left for the air strip expecting one last bumpy Belizean ride, this one in a DeHavillan Twin Otter DHC-6. The prop plane, with room for 22 (including our pilot and co-pilot) was clearly a veteran of this flight from Placencia to Belize City. We boarded first which meant we Sarah and I got a birds eye view of the cockpit. The pilot taxied to the end of the runway, turned around, revved the engines and let her loose. Once up in the air we levelled off at a cruising altitude of somewhere between 1440 and 1520 feet above the ground and settled in for a surprisingly smooth flight. 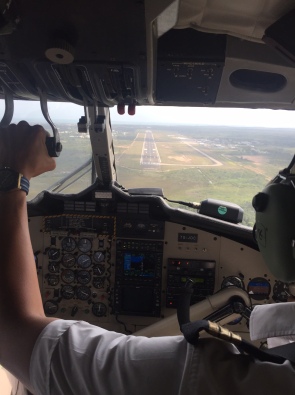 Starting our decent into Belize City drove home the notion that our vacation was, indeed, at an end. It was a terrific trip. We’ll all remember Caracol and the caves (Barton Creek as well as Rio Frio), the jungle, the beach, the food and the drink. Most of all I think we’ll remember the smiling faces of the incredibly hospitable Belizean people. Johnny, Pedro, Gilberto, Viktor, Susilly (just call me Susie), Baromeo, Virgil, Umberto, Graciella, and the rest. We’ll remember the bumpy roads, the diverse landscape and the barrier reef. I’ll remember not dying in the middle of the Caribbean Sea.

If any of this encouraged you to check out Belize for yourself may I suggest doing a little research online. You’ll need bug spray and suntan lotion; a good attitude and a sense of adventure; a full iTunes playlist and a good book or two. Might I also suggest shooting Rachel Hornaday at Central American Journeys an email Rachel@centralamericajourneys.com she did right by us and I’m sure she’ll do the same by you.

My name is Keith Hirshland and I am a four decades television veteran who has spent time both in front of and behind the camera. During nearly forty years in broadcasting my path has crossed in front of, behind and alongside some of the best in the business... And some of the worst. Many of those people I count as friends while others wouldn't make the effort to spit on me if I was on fire. This television life started early watching my Mom and Dad found, fund and run a local affiliate TV station in Reno, Nevada. As a teenager approaching adulthood I worked for them, first as an on-air sports reporter/anchor and later as a director and producer. Jobs in the industry took me across the country and then to many places around the world. Sports is my passion and putting it on TV has been my business. Production credits include auto racing, baseball, basketball, bowling, college football, field hockey, soccer, volleyball and water polo but the majority of my time "in the chair" since 1990 has been invested in the game of golf with both ESPN and The Golf. Channel ( I was one of the first forty people hired by TGC in 1994 ). I am a fan and I watch TV sports as a fan but I also have hundreds of thousands of hours watching from inside a production truck. I think that makes me qualified to comment, my hope is you agree. I have written four books, Cover Me Boys, I'm Going In (Tales of the Tube from a Broadcast Brat), a memoir that is a tribute to my parents, the hard working, creative people who started ESPN2 and The Golf Channel and a look back at my life in television. Cover Me Boys was awarded the “Memoir of the Year” in 2017 by Book Talk Radio Club. In February of 2019 it was released anew by Beacon Publishing Group. My second book is a novel, Big Flies, and is a mystery that tells the story of a father and a son with four of the world's most notorious unsolved robberies as a backdrop. Big Flies was named “Solo Medalist” in the True Crime category by New Apple Awards. My third book, another mystery titled The Flower Girl Murder, was published in 2018. Book number four might be the most fun I ever had on a writing project. Murphy Murphy and the Case of Serious Crisis is a mystery, a love story, and an homage to good grammar. It is both the Book Talk Radio Club BOOK OF THE YEAR for 202 and a TopShelf Awards first prize winner in the mystery category. All four are available at Amazon. Book five is in the capable hands of the good people at Beacon Publishing Group and should be available soon. I look forward to sharing new thoughts about golf, golf television, sports in general and the broadcast industry with you. The views expressed here are mine and mine alone. They are not connected to nor endorsed by any other person, association, company or organization.
View all posts by Keith Hirshland →
This entry was posted in Uncategorized. Bookmark the permalink.