A Sail Through Paradise Part Three

Overnight the wind had gone from blasting to merely blowing which meant we could unfurl the mainsail, let out the jib, and spend the morning of our next day on the water, riding the breeze, under sail. The next destination was the British Virgin Island of Tortola and Captain Jim wasn’t about to let us be mere passengers during the voyage. We were tasked with untying and tying knots, unhooking and hooking clips, steering the boat so the wind always filled the sails on Days Like This and our most important job; not falling overboard. The last assignment turned out to be the only one the four of us executed expertly. In case you didn’t know… sailing is hard.

Depending on the power Jim put behind the engines, or the strength of the wind, the cat could travel along at anywhere from 4 to 8 knots per hour. At any rate in this fast paced, hurry up, hustle to work, the store or the church on time, world we were not going very fast. But we were lucky enough to have someplace to go and literally all day to get there.

Islands dotted the landscape and looked, using a modicum of old school imagination, like great, humpy beasts. Through an eons old lens I could see scales on huge backs exposed to the sun, wind and rain. Over time those scales turned to trees, rocks and shrubs. On either end of the massive backs the heads and tails remained submerged waiting and always ready for action if and when the time was right. They were all different, interesting and individual, some inviting, others not so much. By contrast the sea was incredible in its sameness despite the fact that each ripple on every single wave, bouncing us up and down or shifting us from side to side, was unique.

My father in law, Bob, was the first to accept Jim’s offer and take the wheel. I watched as Bob smoothly slid into the captain’s perch and Jim simply pointed to a spot in the distance (the top of a distant hill or the edge of a landmass on the horizon) and told Sarah’s dad to “go that way.” At that point it was up to Bob to keep the boat headed in the desired direction. Sometimes that was easier said than done. You see a sailboat is actually a tricky bugger to drive. What feels like a tiny turn of the wheel suddenly becomes a change in direction of multiple degrees. Then an attempt to correct actually becomes a massive over correction in the other direction. Bob handled the wheel with a light touch and heeded Jim’s additional advice to keep an eye on the anemometer at the top of the mast. If it was spinning like mad we were headed in the right direction but if it slowed it meant we were not taking maximum advantage of the wind. Of course the sight and sound of the sail starting to flutter and flap, begging for more breath, was also a significant sign as well. Bob was more than equal to the task of keeping us on track and then we got to tack!

My old friend Webster states that this is simply, “changing the course of a sailing vessel by bringing the head into the wind then causing it to fall off on the other side.” Not all that easy when the folks attempting to accomplish the task were four terrestrial beings from New Jersey. Once again having a seaman like Jim proved invaluable. With a smile on his face and in his voice he barked out orders. Okay, okay he didn’t really bark out anything but he did tell us what to do. On the cat there was four different colored ropes connected to various parts of both the mainsail and the jib. There were also two winches around which those ropes could be wrapped to help raise or lower them. When it was time to tack Jim told, then showed, me how to wrap the rope around the winch. Once wrapped my job would be to pull the rope as hard and fast as I could trimming the sail while Bob turned the wheel all the way to the right or the left (depending on the tack)in the effort to change the direction of the boat. If I tired, and I did, there was a winch handle I could turn to make the job a little easier. With a little help, and a lot of teamwork, the mission was accomplished, the sails swallowed the wind and we were headed in a different direction. Jim informed us that we would probably have to tack 6 or 7 more times before reaching our ultimate destination of Soper’s Hole Marina on Tortola. He was right about the number of tacks, we needed 7, but wrong about thinking he wouldn’t have to tell me each and every time how to attach the right rope to the right winch, “Sailing takes me away…” 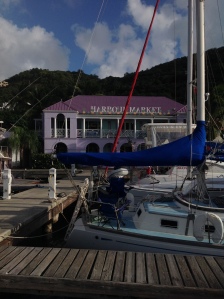 The marina at Soper’s Hole would be our home for the rest of the day and that night. Job one was getting a slip and docking the boat. Job two was to walk to Her Majesty’s Customs Office and wait while Jim, with papers and passports in hand, did what he had to do to make sure we could be the Queen’s guests for the next few days. While we waited Susan and Sarah enjoyed some sort of carrot smoothie concoction whipped up in a 20 year old blender by a wonderfully friendly Tortolian (is that right?). Apparently Jim was convincing enough that the customs officials allowed us to carry on and we walked back to the boat to spend the rest of the day.

There was a public shower and some of the members of our group decided it might be a good idea to take advantage of that. While we debated when and in what order we would do just that, a gentleman (I am making an assumption here but it was a male) strolled out to the back of his boat berthed a few slips away. Most, if not all, catamarans have a hose with a spray nozzle attached to the stern to wash off the salt, sand or dirt off either the deck or the body of a passenger. The man, who appeared to be in his 60’s was about to do just that. We assumed he was French because the boat flew a small French flag and that was the language he appeared to speak to someone else aboard his boat. What we didn’t have to assume was what he looked like naked, because he was.

“Isn’t that special,” was my contribution.

We averted our eyes and enjoyed a good chuckle. My wife and Susan opted for a slightly more private option to get cleaned up and headed for the showers. Later that day we re-provisioned (more ice, booze, snacks, cold cuts, juice and some fresh fish for dinner the next night on the boat). That night we enjoyed dinner and drinks on the patio of the restaurant overlooking the marina and then headed back to the catamaran and to bed with thoughts of what the next day would hold, not the naked Frenchman, in our heads.

Next up Norman and Cooper Islands

My name is Keith Hirshland and I am a four decades television veteran who has spent time both in front of and behind the camera. During nearly forty years in broadcasting my path has crossed in front of, behind and alongside some of the best in the business... And some of the worst. Many of those people I count as friends while others wouldn't make the effort to spit on me if I was on fire. This television life started early watching my Mom and Dad found, fund and run a local affiliate TV station in Reno, Nevada. As a teenager approaching adulthood I worked for them, first as an on-air sports reporter/anchor and later as a director and producer. Jobs in the industry took me across the country and then to many places around the world. Sports is my passion and putting it on TV has been my business. Production credits include auto racing, baseball, basketball, bowling, college football, field hockey, soccer, volleyball and water polo but the majority of my time "in the chair" since 1990 has been invested in the game of golf with both ESPN and The Golf. Channel ( I was one of the first forty people hired by TGC in 1994 ). I am a fan and I watch TV sports as a fan but I also have hundreds of thousands of hours watching from inside a production truck. I think that makes me qualified to comment, my hope is you agree. I have written four books, Cover Me Boys, I'm Going In (Tales of the Tube from a Broadcast Brat), a memoir that is a tribute to my parents, the hard working, creative people who started ESPN2 and The Golf Channel and a look back at my life in television. Cover Me Boys was awarded the “Memoir of the Year” in 2017 by Book Talk Radio Club. In February of 2019 it was released anew by Beacon Publishing Group. My second book is a novel, Big Flies, and is a mystery that tells the story of a father and a son with four of the world's most notorious unsolved robberies as a backdrop. Big Flies was named “Solo Medalist” in the True Crime category by New Apple Awards. My third book, another mystery titled The Flower Girl Murder, was published in 2018. All three are available at Amazon. Book four is, as they say, in the books. It's in the capable hands of the good people at Beacon Publishing Group and I'll keep you posted. I look forward to sharing new thoughts about golf, golf television, sports in general and the broadcast industry with you. The views expressed here are mine and mine alone. They are not connected to nor endorsed by any other person, association, company or organization.
View all posts by Keith Hirshland →
This entry was posted in general observations. Bookmark the permalink.