A Sail Through Paradise Part One

I am a landlubber. In fact I just might take “landlubbing” to the extreme. I get little enjoyment from going in the water. I see nothing relaxing about lying under the sun, at a beach, on the sand. Landlubber IS a word, not just a Disney pirate insult. Webster defines it as “an unseasoned sailor or someone unfamiliar with the sea.” Yep that’s me. I would go even further and add, “Someone who prefers the land to the water” to my version of the definition.

It hasn’t always been that way. I was born on the Hawaiian Island of Oahu and was told I spent hours as a small child not only at the beach, but in the Pacific Ocean. I even have pictures to prove it. We left Hawaii when I was two but I remember family vacations as a kid, in the car on the way to our ultimate destination agreeing only to stop the night at a hotel or motel with a swimming pool. I think the way I feel about spending time in the water changed during the summer of 1975. I was 19 and, like millions of others, went to see the movie Jaws and read the Peter Benchley book on which it was based.

Deep down I’m sure I realized there were always beasts, big and small, with sharp teeth deep down in the water but after Jaws I couldn’t get it out of my head that those creatures, deep down, were swimming around just waiting to sink those teeth into me. So ask me how I spent the seven days between January 3rd and January 10th this year. Why, on a catamaran sailing the Caribbean around the Virgin Islands of course.

The winter getaway to paradise was the brainchild of my wife, Sarah, and happily included her parents, my in-laws, Susan and Bob. She chose the Virgin Islands because 1) they’re beautiful and 2) because her uncle Jim has been a sailboat Captain, living on Water Island near St. Thomas, for more than 30 years. He agreed to be our skipper and we were fully prepared to be his willing crew. I stood alone in my trepidation. My wife and her parents could not have been more excited about the prospect of the sun, sand and brilliant blue water that awaited us. I was perfectly fine with the sun part it was that pesky sea and sand that was the source of my concern.

Our flight left Newark International Airport at 7:15 AM on Saturday. It was 17 degrees. Four hours later we arrived on St. Thomas where it was 65 degrees warmer on the thermometer. We were greeted, first by a Cruzan rum representative who handed out shots of mango flavored liquor, and then by a taxi driver holding up a sign on which we saw our name. In a heavy accent he told us his name was Wells. He showed us where his van was and we waited for and in short order grabbed our bags. Wells helped us put our stuff in the back and we all climbed in for the ride. Along the way our driver introduced us to “St. Lucia country music” by way of a homemade mix tape to which he sang along. The ride was short, a couple of songs worth, and we arrived at the marina where our Caribbean home away from home was docked. For the next week a 41 foot catamaran which someone had named Days Like This (as in “Mama said there’d be…) was home.

We disembarked the van, thanked and paid Wells, grabbed our gear and headed toward the slip hoping to change from jeans, jackets and long sleeved shirts to shorts swimsuits and tee shirts as quickly as we could. As we rounded a corner we saw Uncle Jim, henceforth referred to as Captain Jim, headed our way. After hellos and hugs we headed aboard Days Like This to change and stow our stuff. My father-in-law Bob had already started to tan. The boat (aside alert… I once asked my pop, who was in the Navy, the difference between a boat and a ship. With a straight face he answered, “A boat is what hangs off the side of a ship.”) was impressive. 41 feet long, about 20 feet wide it featured a mainsail, a jib, a trampoline like netting for relaxing on the bow and a bar-b-cue and two sets of steps for climbing in and out of the water at the stern. Below decks we found berths and heads for at least six people.

We chartered Days Like This through a St. Thomas company called CYOA (Caribbean Yacht Owners Association www.cyoacharters.com) and while signing paperwork in the office we found out our “ride” was only a year old and in tip top shape for the journey. We also bought croakies for our sunglasses and I picked up a string with clips designed to keep a ball cap attached to a shirt collar, both things came in handy while sailing in a 20 knot wind. We were very lucky to have Uncle Jim as our Captain. He grew up around and on boats, has sailed a mono-hulled sailboat across the Atlantic Ocean on more than one occasion, and has piloted charters and party boats around the Virgin Islands for years. He was our “Skipper” and we were all “Gilligans”. We left the office and headed for a nearby restaurant to grab lunch and discuss our plans for the six day sail.

Over lunch, and our first adult beverage of the trip, we discovered Jim had already given the itinerary some thought. His plan was to spend the first night docked right where we were, giving everyone including him, a chance to acclimate to the cat. He had sailed vessels of all shapes and sizes in all kinds of water but he told us he had never taken the helm of a 41 foot motor catamaran. We weren’t concerned.

Bright and early on day two we would head out, under motor power because the winds were expected to climb as high as 30 knots, to St. John Island where we would find a mooring (an anchored buoy off shore on which we would secure the boat), tie up, hang out, swim and snorkel, have dinner and spend the night. Day two at sea would be a day under sail heading to the British Virgin Island of Tortola. Once there we would head in to Sopers Hole Marina, find a slip, and settle in for the night. Jim also informed us while on Tortola we would have to pay a visit to Her Majesty’s Customs Office to announce our presence and intentions before continuing on the journey. On day three we would continue, under sail, and head to Norman Island to snorkel and swim in and around “The Caves”, then find a mooring and have dinner and spend the night on Days Like This. 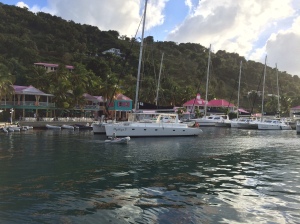 The next day we would stay in the British Virgin Islands and sail over to Cooper Island. Once there we would find another mooring off shore leaving us a quick and easy dinghy ride to dinner and drinks at one of the islands’ best rum bars and restaurants. After another night on the boat we would sail to our next stop, Virgin Gorda, dock the cat in a harbor slip, and check out the world famous “baths”, a popular snorkeling, swimming and hiking spot on the island. Dinner that night would be on shore followed by another good night’s sleep under the Caribbean sky. Finally we’d wake Friday morning, head back toward St. Thomas, and spend one last night on Days Like This moored in Honeymoon Bay. Sounded like a plan except of course for the swimming, snorkeling, caves and baths parts. We all expressed our enthusiasm for the itinerary and our excitement for the adventure. All that was left was to find Wells, have him shuttle us to the local supermarket and liquor store, and spend a fortune on provisions.

Up next… we shove off

My name is Keith Hirshland and I am a four decades television veteran who has spent time both in front of and behind the camera. During nearly forty years in broadcasting my path has crossed in front of, behind and alongside some of the best in the business... And some of the worst. Many of those people I count as friends while others wouldn't make the effort to spit on me if I was on fire. This television life started early watching my Mom and Dad found, fund and run a local affiliate TV station in Reno, Nevada. As a teenager approaching adulthood I worked for them, first as an on-air sports reporter/anchor and later as a director and producer. Jobs in the industry took me across the country and then to many places around the world. Sports is my passion and putting it on TV has been my business. Production credits include auto racing, baseball, basketball, bowling, college football, field hockey, soccer, volleyball and water polo but the majority of my time "in the chair" since 1990 has been invested in the game of golf with both ESPN and The Golf. Channel ( I was one of the first forty people hired by TGC in 1994 ). I am a fan and I watch TV sports as a fan but I also have hundreds of thousands of hours watching from inside a production truck. I think that makes me qualified to comment, my hope is you agree. I have written four books, Cover Me Boys, I'm Going In (Tales of the Tube from a Broadcast Brat), a memoir that is a tribute to my parents, the hard working, creative people who started ESPN2 and The Golf Channel and a look back at my life in television. Cover Me Boys was awarded the “Memoir of the Year” in 2017 by Book Talk Radio Club. In February of 2019 it was released anew by Beacon Publishing Group. My second book is a novel, Big Flies, and is a mystery that tells the story of a father and a son with four of the world's most notorious unsolved robberies as a backdrop. Big Flies was named “Solo Medalist” in the True Crime category by New Apple Awards. My third book, another mystery titled The Flower Girl Murder, was published in 2018. All three are available at Amazon. Book four is, as they say, in the books. It's in the capable hands of the good people at Beacon Publishing Group and I'll keep you posted. I look forward to sharing new thoughts about golf, golf television, sports in general and the broadcast industry with you. The views expressed here are mine and mine alone. They are not connected to nor endorsed by any other person, association, company or organization.
View all posts by Keith Hirshland →
This entry was posted in Uncategorized and tagged British Virgin Islands, cyoacharters.com, Jaws, Peter Benchley, St. Thomas, U.S. Virgin Islands. Bookmark the permalink.