In Your Perfect World Which Pro Golfer Wins Next?

The world of golf had reasons to celebrate recently when a couple of the “good ones” found their way back to the winner’s circle. Just two weeks ago good guy Charley Hoffman won on the PGA TOUR while long suffering, fan favorite, Christina Kim picked up a victory on the LPGA Tour.

The rarely reserved, largely liked Kim hadn’t won in 221 starts, since the 2005 Tournament of Champions, and in those ten years has battled demons, both personal and professional, including injury, depression and thoughts of suicide. But the 3-time U.S. Solheim Cup team member and self-admitted LPGA Tour “class clown” battled through it all and found the strength and her game during an emotional week in Mexico. Friends, family and fans rejoiced because Christina Kim was back.

Hoffman’s road to victory wasn’t anywhere near as hair-raising. Sure he hadn’t won in five years and more than 100 starts but he did win more than a million bucks a year between wins and was lucky enough to avoid anything resembling an injury. But Hoffman has always been well-liked by both peers and galleries and it was good to see him get a well-deserved third trophy.

So who would we, as fans, like to see win again next? I don’t know about you but I have a short list of both men and women. For my money it would be fun to see them all victorious but for the purposes of this discussion I’ll rate them from “least to most” on the “covermeboys like to see win again” meter.

I’m not a huge JD fan but even I have to admit his winning again would be a great story. The two-time major champion hasn’t won on the PGA TOUR in more than a decade. Daly won once in 2004 then finished second (thanks to playoff losses) twice in 2005 before sliding into a downward spiral both personally and professionally. In ’04 and ’05 “Long John” took $4,119,428 PGA TOUR dollars to the bank playing in 45 tournaments and averaging $85,000 per start. In the 10 years since those two successful campaigns he’s come up woefully short managing just two top-10’s, earning a total of $1,566,133. He’s teed it up on tour 104 times, averaging just $15,000 per start, pocketing far less than his heyday average in exactly half of those ten years.

And talk about personal demons! John Daly is a walking, talking, smoking, “tee it high and let it fly”, lifetime invitee to the Jerry Springer Show (does Jerry Springer still have a show?). There might be as many people upset as thrilled were John Daly to win again but can’t you just picture the party?

The 2003 Masters champion last won on the PGA TOUR in the Arizona desert at the end of the 2007 season. I remember because I was there producing Golf Channel’s broadcast of the Fry’s Electronics Open. 148 starts later the affable Canadian is still looking for his next victory. He did have one second place finish during a pretty good 2014 making 9 of 15 cuts and almost $900,000. Weir has gone through swing changes and battled several injuries in his quest to win again. He became the first Canadian born player to win a major championship when he donned the green jacket in ’03 and I have no doubt an entire country as well as millions of golf fans all over the world would happily raise a glass if Mike Weir was to finish atop a PGA TOUR leaderboard on any given Sunday going forward. 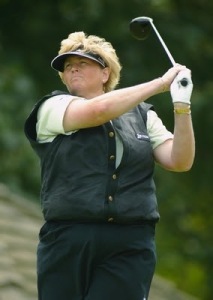 Davies is a legend, about to finally and rightfully be inducted into the World Golf Hall of Fame. She has a larger than life personality and the golf game to match. 88 worldwide professional wins (20 on the LPGA Tour), three majors and seven-time LET Order of Merit winner Laura Davies won five times in Europe in 2010 but hasn’t won an LPGA Tour tournament since 2001.

Davies is also a “dame” in most every sense of the word. Appointed officially a DBE (Most Excellent Order of the British Empire) by the Queen of England in 2014 she is also the only player, on either side of the pond, to compete in the first twelve Solheim Cup matches and is that competition’s all time points earner with 25. In 1994 she became the only professional golfer, male or female, to win on five different tours in one calendar year.

She won the Wegman’s Rochester International by three shots over Maria Hjorth and Wendy ward in June of 2010 and no one who follows golf would have imagined she would not win another LPGA Tour event. If and when she does I will happily get in a very, very long line to congratulate her and celebrate.

Full disclosure… Through my work in golf television I personally know all of the players on my short list but there is only one that I can honestly call a friend. But that isn’t the only reason I would be just one of many who would like to see him win again.

I met Jason after he turned pro in 1997. We were broadcasting events on, what was then, the Nike Tour and Jason was a rookie. He was no longer a rookie but was still “with” us out there in 2000 when Buy.com took over the sponsorship of that tour and again in 2003 when Nationwide Insurance became the umbrella sponsor. He was, and is still, a beauty. He was big, burly and a bomber, easy with a smile, outgoing and always available when we needed some for a feature, a soundbite, or an interview. We saw him win (once in 2000 and twice in 2002) and lose and he was always the same guy regardless of the outcome on the golf course. He did (and I’m guessing still does) a mean Garth Brooks imitation and in 2005 he became golf’s Cinderella story.

Gore qualified for the United States Open Championship at Pinehurst No. 2 that year and for 54 holes turned the golf world on its ear. Rounds of 71, 67, and 72 put him just three shots behind, and in the same final pairing with, 2001 and defending champion Retief Goosen. With the world watching and much of it pulling for the big California kid, Gore’s magical run ran out and he stumbled to a final round 84 and tumbled down the leaderboard to a tie for 48th. With the same positive outlook on life he returned to the Nationwide Tour and for a stretch of time you could argue that he was the best player on the planet.

He won three Nationwide Tour events in five weeks earning him an automatic promotion to the PGA TOUR. He picked up his first place check and his tour card on August 7th in Omaha. Six weeks later he beat defending champion Vijay Singh, Phil Mickelson and 151 others to win the 84 Lumber Classic. That was five professional wins in a little more than two months! It was impossible to believe at the time, and still hard to believe now, that the 2005 84 Lumber Classic would be Jason Gore’s only PGA TOUR title. After four more relatively successful PGA TOUR years Jason lost his card following the 2009 season. He did win one more time on the Nationwide Tour, in 2010, but subsequently fell victim to injury, self-doubt, and missed cuts. Things got so bad he was ready to give up and quit the game. On more than one occasion he and I had lengthy discussions about a future for him staying connected to the game he loved as an announcer. I thought then, and still do now, that he would be a good broadcaster but thankfully he regained his desire, reclaimed his passion and resurrected his game and headed back out on tour.

He once again earned his PGA TOUR playing privileges through what is now the Web.com tour last year and is giving it another go this season. To paraphrase Monty Python, were Jason Gore to win again on the PGA TOUR “there would be much rejoicing” and I would help lead the cheers.

It may be too late for golf’s “Grande Dame” to win again or too big a task for one of its biggest personalities in Gore but don’t tell that to them… just ask Christina Kim.

My name is Keith Hirshland and I am a four decades television veteran who has spent time both in front of and behind the camera. During nearly forty years in broadcasting my path has crossed in front of, behind and alongside some of the best in the business... And some of the worst. Many of those people I count as friends while others wouldn't make the effort to spit on me if I was on fire. This television life started early watching my Mom and Dad found, fund and run a local affiliate TV station in Reno, Nevada. As a teenager approaching adulthood I worked for them, first as an on-air sports reporter/anchor and later as a director and producer. Jobs in the industry took me across the country and then to many places around the world. Sports is my passion and putting it on TV has been my business. Production credits include auto racing, baseball, basketball, bowling, college football, field hockey, soccer, volleyball and water polo but the majority of my time "in the chair" since 1990 has been invested in the game of golf with both ESPN and The Golf. Channel ( I was one of the first forty people hired by TGC in 1994 ). I am a fan and I watch TV sports as a fan but I also have hundreds of thousands of hours watching from inside a production truck. I think that makes me qualified to comment, my hope is you agree. I have written four books, Cover Me Boys, I'm Going In (Tales of the Tube from a Broadcast Brat), a memoir that is a tribute to my parents, the hard working, creative people who started ESPN2 and The Golf Channel and a look back at my life in television. Cover Me Boys was awarded the “Memoir of the Year” in 2017 by Book Talk Radio Club. In February of 2019 it was released anew by Beacon Publishing Group. My second book is a novel, Big Flies, and is a mystery that tells the story of a father and a son with four of the world's most notorious unsolved robberies as a backdrop. Big Flies was named “Solo Medalist” in the True Crime category by New Apple Awards. My third book, another mystery titled The Flower Girl Murder, was published in 2018. Book number four might be the most fun I ever had on a writing project. Murphy Murphy and the Case of Serious Crisis is a mystery, a love story, and an homage to good grammar. It is both the Book Talk Radio Club BOOK OF THE YEAR for 202 and a TopShelf Awards first prize winner in the mystery category. All four are available at Amazon. Book five is in the capable hands of the good people at Beacon Publishing Group and should be available soon. I look forward to sharing new thoughts about golf, golf television, sports in general and the broadcast industry with you. The views expressed here are mine and mine alone. They are not connected to nor endorsed by any other person, association, company or organization.
View all posts by Keith Hirshland →
This entry was posted in general observations, Golf, golf on tv, sports and tagged Charley Hoffman, Christina Kim, Jason Gore, John Daly, Laura Davies, LPGA Tour, Mike Weir, Nationwide Tour, PGA TOUR, United States Open Championship. Bookmark the permalink.