In Defense of Baseball

Posted on November 7, 2014 by Keith Hirshland

In his 1956 biography, the great golfer and gamesman, Walter Hagen wrote, “You’re only here for a short visit. Don’t hurry, don’t worry. And be sure to smell the flowers along the way.” I didn’t know Hagen personally, never met the man, but I do know in addition to being one of golf’s great players and quite possibly the game’s most interesting character, Walter Hagen was a baseball fan.

In fact at one time in his life Hagen was an ambidextrous, fastball hurling, pitcher who dreamt of a professional baseball career. Instead he turned to golf and etched his name in the history books with 45 professional wins, 11 major championships and the credit for first uttering a phrase that would become, “stop and smell the roses”. I bring this all up because I believe it’s time we all take a page out of Hagen’s near 60 year old book, especially when it comes to America’s pastime, baseball.

The hue and cry these days is that baseball is broken because “it takes too long to play” or it’s “too slow”. Too long or too slow for who? My under-educated guess is that a large percentage of the people screaming for baseball to step on the accelerator haven’t stepped foot in any of the 30 major league ballparks around the country in the past five years. I’m fairly positive they haven’t experienced the entertainment that is minor league baseball at hundreds of other parks.

Coming from a guy who cannot stand to wait for one extra second to hit a golf shot, I say baseball is just fine. No need to panic (or as San Francisco Giants fans spell it, Panik). Researchers put the clock at almost exactly 3 hours for the average time of a major league baseball game this year. That’s up a tick from last year but let’s take a longer look back at the evolution of time when it comes to the length of games played.

In 2000, at the turn of the century, the time it took to play this century old game ballooned to 2 hours and 58 minutes. A 28 minute per game jump.

But in 2003 the time it took to play an average baseball game dropped again down to 2 hours and 46 minutes.

So since 1960, more than 50 years ago, the average time for a major league baseball game has increased by a grand total of 22 minutes. Geez guys pick up the pace for goodness sake! By comparison NFL games now average 3 hours and 12 minutes (12 minutes longer than baseball). What’s more interesting and potentially embarrassing is the fact that the Wall Street Journal recently found that the average time the ball is actually in play during an NFL game is, wait for it, 11 minutes. Eleven out of 192. You can’t say that about baseball. 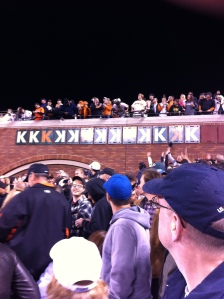 That is but one reason why baseball is a far more enjoyable fan experience both at the ballpark and on the couch. Commercial breaks in baseball come almost exclusively between or at the end of innings or when managers make a pitching change. Commercial breaks in football many times occur after consecutive plays. While baseball’s TV ratings nationally may be down, locally the ratings for many teams are up year over year and attendance in 2014 was at an all-time high with more than 72 million fans going to games. 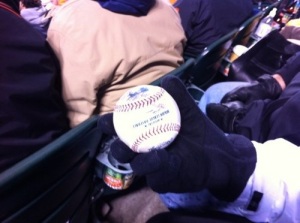 Don’t get me wrong I am not denying that baseball games have gotten longer but I will not join the chorus of folks who claim that’s a bad thing. Instead I prefer to list a couple of reasons why I think games take up more time:

There are anomalies; for instance games at home run friendly Coors Field (home of the National League’s Colorado Rockies) average 3 hours even while contests at Safeco Field (American League’s Seattle Mariners home stadium) go by in just 2 hours and 44 minutes but as a whole American League games take longer and drive up the average minutes.

2) THE SPECIALIZATION OF PITCHING STAFFS – As a kid I sat in the stands at Candlestick Park in San Francisco and watched Juan Marichal and Jack Sanford pitch compete games on more than one occasion. Dodgers’ fans can say the same about Sandy Koufax and Don Drysdale, Cardinals fans point to Bob Gibson and Braves faithful have Warren Spahn. These guys and their peers pitched. According to baseball-reference.com in 1963 the top five National League pitchers, in terms of total innings pitched, threw more than 284 innings led by Marichal with 321.1. Drysdale (315.1), Koufax (311.0), “Doc” Ellsworth (290.2) and Sanford (284.1) rounded out the top five. In 2014 the most innings anyone pitched was David Price (playing for two teams) at 284.1 which wouldn’t have cracked the top 15 in 1963. World Series hero Madison Bumgarner led the Giants’ staff but threw just 217.1 innings.

In addition Warren Spahn led the league, in 1963, with 22 complete games. The great Sandy Koufax started 40 games that year and completed 20! That year, in what has gone down in history as one of baseball’s greatest games, Spahn and Marichal squared off in a 16 inning duel and both went the distance! In 2014 L.A.’s Clayton Kershaw led the league with SIX compete games. That is now considered extraordinary and will no doubt earn the Dodgers’ lefty his second straight Cy Young Award as the National League’s best pitcher.

In baseball’s early days what we now call the bullpen didn’t exist. In fact, the only time a substitution could enter the game was because of either “injury or sickness”. If a pitcher was ineffective he would simply switch positions with another player in the field. That changed in 1923 when, according to experts, Washington Senators player Firpo Marberry became the game’s first relief pitcher. Fifty years later the “closer era” came to baseball and it took just ten years after that for the “saves” statistic to outnumber “complete games” in the sport. That development ultimately spawned pitch counts, middle relievers, and set up men. It also meant multiple stoppages of play and, of course, longer games.

Baseball has changed and evolved over the years and the games are taking longer to play but, from this fan’s seat, in section 102, there is NO reason for alarm. The experience at the park, whether it’s AT&T, Fenway, Wrigley Field, Yankee Stadium or TD Bank Ballpark (home of the Atlantic League Somerset Patriots) is still the best in professional sports. It is also, by the way, among the most affordable.

Also, despite shouts to the contrary, baseball is still “America’s Pastime”. Dictionary.com defines “pastime” as “something that serves to make time pass agreeably; a pleasant means of amusement, recreation or sport.” By definition it is baseball that remains this country’s pastime.

So get off baseball’s back and get your butt to a ball yard. Oh and on the way don’t forget to “smell the flowers along the way.”

My name is Keith Hirshland and I am a four decades television veteran who has spent time both in front of and behind the camera. During nearly forty years in broadcasting my path has crossed in front of, behind and alongside some of the best in the business... And some of the worst. Many of those people I count as friends while others wouldn't make the effort to spit on me if I was on fire. This television life started early watching my Mom and Dad found, fund and run a local affiliate TV station in Reno, Nevada. As a teenager approaching adulthood I worked for them, first as an on-air sports reporter/anchor and later as a director and producer. Jobs in the industry took me across the country and then to many places around the world. Sports is my passion and putting it on TV has been my business. Production credits include auto racing, baseball, basketball, bowling, college football, field hockey, soccer, volleyball and water polo but the majority of my time "in the chair" since 1990 has been invested in the game of golf with both ESPN and The Golf. Channel ( I was one of the first forty people hired by TGC in 1994 ). I am a fan and I watch TV sports as a fan but I also have hundreds of thousands of hours watching from inside a production truck. I think that makes me qualified to comment, my hope is you agree. I have written four books, Cover Me Boys, I'm Going In (Tales of the Tube from a Broadcast Brat), a memoir that is a tribute to my parents, the hard working, creative people who started ESPN2 and The Golf Channel and a look back at my life in television. Cover Me Boys was awarded the “Memoir of the Year” in 2017 by Book Talk Radio Club. In February of 2019 it was released anew by Beacon Publishing Group. My second book is a novel, Big Flies, and is a mystery that tells the story of a father and a son with four of the world's most notorious unsolved robberies as a backdrop. Big Flies was named “Solo Medalist” in the True Crime category by New Apple Awards. My third book, another mystery titled The Flower Girl Murder, was published in 2018. All three are available at Amazon. Book four is, as they say, in the books. It's in the capable hands of the good people at Beacon Publishing Group and I'll keep you posted. I look forward to sharing new thoughts about golf, golf television, sports in general and the broadcast industry with you. The views expressed here are mine and mine alone. They are not connected to nor endorsed by any other person, association, company or organization.
View all posts by Keith Hirshland →
This entry was posted in general observations, sports and tagged AT&T Park, Baseball, Bob Gibson, Clayton Kershaw, Don Drysdale, Fenway Park, Jack Sanford, Juan Marichal, Madison Bumgarner, NFL, San Francisco Giants, Sandy Koufax, Somerset Patriots, Wall Street Journal, Walter Hagen, Warren Spahn, Wrigley Field, www.baseball-reference.com, Yankee Stadium. Bookmark the permalink.